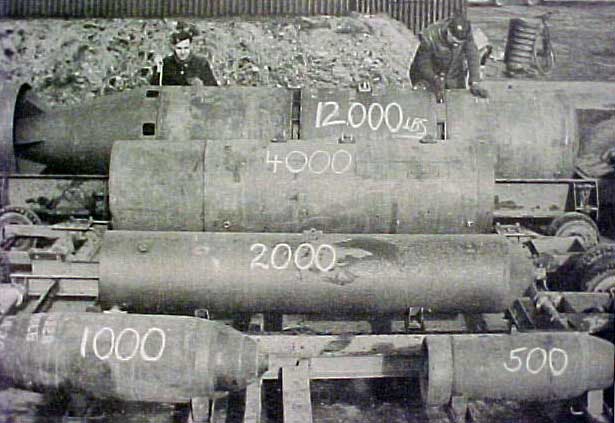 Along with antiquated aircraft and bombing techniques some of which were left over's from World War I. Many of the general purpose bombs used by Bomber Command during the first two years of the war suffered from one serious short coming. That their metal weight to explosive ratio was significantly out of balance, in that there was too much metal and too little explosive. Add to this that entire inventories overall effectiveness was generally questionable in such that even if a bomber successfully reached the target and dropped its bomb load, there was no guarantee that the bombs would actually explode. Particularly troublesome were the 1,900 lbs. and 4,000 lbs. designs. Development and production problems continued to plaque many of these designs and many of the 4,000 lbs. GP bombs continued in limited use until November 1943 and was only then removed from the Commands inventory due to fusing problems.

By the end of 1941, most of the smaller General Purpose bombs were being phased out in favour of newer Medium Capacity (MC) designs which had improved metal to explosive ratios and also proved more reliability and generally exploded on impact, unless fitted with delayed action fuses. By the summer of 1944 the Command's requirements for bombs of all sizes was immense as the demand continued to support the invasion forces who were still attempting to established footholds in Europe after the D-Day invasion. As a result a shortage of the MC bombs developed and bomb loads were supplemented by using the small 500 lbs. and 250 lbs. GP bombs which still remained in storage.

First introduced in to the Command's inventory at the end of 1941, the bomb contained twice as much explosive and its General Purpose equivalent and became a mainstay for bombing operations. And normally made up the balance of any bomb load which contained a 4,000 lbs. HC "Cookie".

Introduced in the spring of 1943, the 1,000 lbs. MC bomb was a very effective and efficient. Its use however was often limited as inventory levels always appear to have been inadequate to meet the Command's demand. Rationing of the bomb was actually introduced during 1944, partly due to the demands placed on the Command supporting the D-Day invasion forces.

Not to be mistaken for the 4,000 lbs. HC "Cookie" the 4,000 lbs. MC was originally designed for low level bombing operations and entered service in January 1943. It's immediate use was limited by the fact that only the Avro Lancaster's bomb bay was of sufficient size to carry it and then only one bomb per aircraft could be carried to the target. With the introduction of the deHavilland Mosquito the 4,000 lbs. MC bomb found a new lease on life and was dropped from high altitude by this aircraft from the autumn of 1944 onwards.

Introduced primarily to attack shipping or for heavily reinforced targets. The 2,000 lbs. AP bomb saw service against the German battleships Scharnhorst and Gneisenau while docked in Brest during 1942. The type was also used in 1944 to attack underground oil plants and storage facilities in France, but results were generally disappointing and faulty fusing resulted in many of the bombs failing to detonate.

Due to the limited amount of suitable targets available to the Command throughout the war, few SAP bombs were dropped. But with the serve shortage of bombs available during the summer of 1944 SAP's were used against some of the V-1 Rocket sites located in France.

Introduced in early 1942 and designed to be dropped with the use of a parachute. Results were proved to be a disappointment as the parachute made the bomb almost impossible to aim accurately. The bomb was redesigned at the Command's request and incorporated the use of a ballistic tall unit. The new variant became available for use in August of 1942 and remained a part of the Command's general inventory throughout the remainder of the war.

Although over 400 of the type had been dropped, the type was not officially part of the Command's inventory until January 1942. Used primarily against built up areas, the bomb effectively destroyed or heavily damaged everything within close proximity to its impact point and was often used in the opening stages of a major attack in order to open up (blow roofs off and windows in) the buildings within the target area. This in turn allowed for the incendiary bombs dropped in the following attack waves to have ample fuel in which to ignite and burn.

The 8,000 lbs. HC was developed by joining together two 4,000 lbs. HC bomb sections, which although similar in design to the standard "Cookie" were actually shorter in length and of larger diameter. Only the front section was fused and this in turn detonate the connecting section by blast wave. This bombs were deployed against similar targets as the smaller 4,000 lbs. HC type.

Often confused with the 12,000 lbs. "Tallboy," the 12,000 lbs. HC bomb like the 8,000 lbs HC variant was developed by joining together three 4,000 lbs. HC bomb sections, which although similar in design to the standard "Cookie" were actually shorter in length and of larger diameter. Only the front section was fused and this in turn detonate the connecting section by blast wave. However, unlike its smaller relatives it was use primarily against special precision targets such as canals or factories.

Designed by Dr. Barnes Wallis for use against the German Ruhr Valley Dams it was successfully deployed by 617 Squadron on the night of 16/17 May 1943. Upkeep was technically speaking more a mine than a bomb, contained 9,150 lbs. of Torpex explosive and was denoted using a hydro-static fuse preset to exploded at a preset depth. The weapon was delivered to the target underneath the aircraft, prior to dropping the weapon was rotated at a predetermined revolution which allowed the weapon to skip across the surface of the water; upon hitting the face of the dam Upkeep would then sink and explode at a preset depth.

Designed by Dr. Barnes Wallis, "Tallboy" and "Grandslam" marked a major advance in bomb design and ballistics. Whereas traditional bombs exploded on impact with a surface. Dr. Wallis' so called "earthquake" bombs were designed to penetrate into the earth before exploding and relied entirely on destroying the target by shock wave rather than blast. Are often a near miss rather than a direct hit proved sufficient to totally destroy a target.

Tallboy's were constructed using high quality steel and each hard a specially hardened nose cone to allow the bomb to penetrate the earth. Each was stabilized in decent by four tail fins which were inclined by five degrees which caused the bomb to rotate around its vertical axis as it fell, and allowed for the bomb to stabilize itself as it fell..

Dropped, from specially modified Avro Lancaster's the only aircraft capable of lifting the bomb, at an optimum height of 18,000 feet, a Tallboy filled with 5,200 lbs. of Torpex explosive took 37 seconds to reach the ground. At impact a terminal speed of 750 mph was reached and resulted in the bomb penetrating approximately 25 feet before exploding. The first of its type was dropped by Lancaster's of 617 Squadron on 8/9 June 1944 against the railway tunnel near Saumur France. 854 Tallboys were dropped before the end of hostilities against targets that included shipping, submarine and E-Boat pens, viaducts, canals and V-Weapon sites. In the event that a target was unidentified or was obscured for any reason, crews were instructed to bring their weapon home and land!

Similarly designed by Dr. Barns Wallis, the 22,000 lbs. "Grandslam," which contained 11,000 lbs. of Torpex explosive was the largest of all bombs to enter the Command's inventory during World War Two. Deployed and acting in basically the same way as the 12,000 lbs. "Tallboy", Grandslam was used against heavily reinforced targets such as U-Boat Pens. Only 40 of the type were dropped during the war and like its smaller brother could only be delivered by heavily modified Avro Lancaster.

Designed and made available to the Command in 1943, the 500 lbs. oscillating mine was not used until 15 September 1944 when the German battleship Tirpitz was attack at Kaa Fjord, Norway.

With United States entry into the war and the arrival of the USAAF in England. Bomber Command gained access to American made bombs. During 1944 when British made bombs were in short supply the Command dropped significant amounts of the American type ANM 44, 58 these being the equivalent to the British 500 lbs. MC's. Additionally large quantities of ANM 59 and ANM 64, 1,000 lbs bomb were also pressed in to service by all of the Command's front line squadrons.

For the Command's armours the introduction of these types was we must assume welcomed, as the American bombs were faster to fuse and tail than the British made bombs they were used to working with. However, the "box" tail design which added significant length to each bomb, drastically reduced the amounts of bombs which could be carried by each British aircraft.

The mainstay of the Command's incendiary devices was the 4 lbs. Magnesium (IB) bomb. Packed into Small Bomb Containers (SBC) to allow for enmass delivery, the device was not aim able and once dropped often became effected by cross winds. This resulted in incendiary attacks become wide spread downwind of the target and also lead to other bombers being struck by falling bombs. In May 1943 efforts were made to developed a delivery device for the 4 lbs. IB which would allow for them to be aimed and therefore more accurate. Development, delivery and operational problems all plagued the system and by wars end only a limited number had reached squadron service.

This type differed from the 4 lbs incendiary in that is could be aimed similarly to a conventional bomb. Various marks of the phosphorus filled device were developed between 1941 and 1944. Over 3 million of the type had been dropped by the time it was phased out in favour of the 4 lbs. IB.

Developed in early 1944 the 30 lbs. J-Type IB entered operational trails in April of that year and was unique in that upon impact the J-Type IB produced a 2 foot wide by 15 foot long white flame which burned for one minute or more. Results however, showed that the type was only half as effective per ton as that of the 4 lbs. IB and had been phased out of service by August 1944. Regardless of its short life span over 400,000 were dropped.

First used in 1940 the 250 lbs. IB used a light bomb casing originally designed for chemical warfare and was used extensively for several years by the Command. The type was eventually converted into the first Target Marking (TI) devices which used coloured pyrotechnic materials and became standard equipment for the Pathfinder Force.

A scaled up model of the 250 lbs. IB, this device which contained liquid phosphorus was carried primarily by Mosquitoes and used in a low level attack roll.

Probably the least known of all of the Command IB devices; it used the casing of a 4,000 lbs "Cookie" HC bomb, which was filled with incendiary materials. Delivered mostly by Mosquitoes, the type was used mainly against specially selected targets.

Incendiaries were carried in an aircrafts bomb bay using Small Bomb Containers (SBC's) and were packed into cluster's. These cluster types often being referenced in the Squadron;s Operational Record Book (ORB):

First introduced for Bomber Command Operations in April 1940, the Mk. I - IV was sturdily built and designed to withstand drops from aircraft flying at 200 mph at altitudes varying from 100 to 15,000 feet. Containing approximately 750 lbs. of explosives the mine could be detonated using various triggering devices depending on the application required. The type along with the Mk. V and VII became the standard mine used by the Command until being replaced by the Mk. VI in 1944.

Introduced into service sometime during 1940-41 this mine was a smaller version of the Mk. I-IV. Containing between 625 lbs. and 675 lbs. of explosives this mine was usually detonated using magnetic triggers, although it could be configured to use our triggering devices.

Introduced in 1944, the Mk.VII was an improved version on the Mk. V although no increase in the size of explosive charge was made. 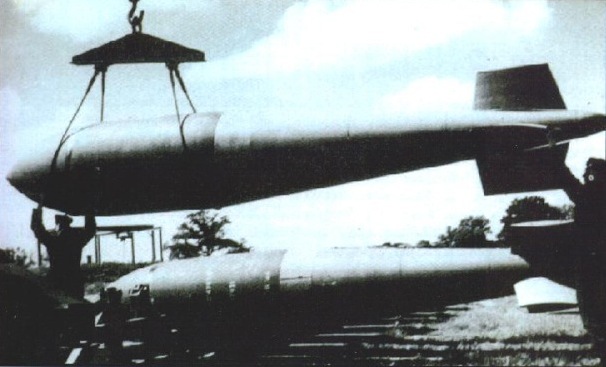 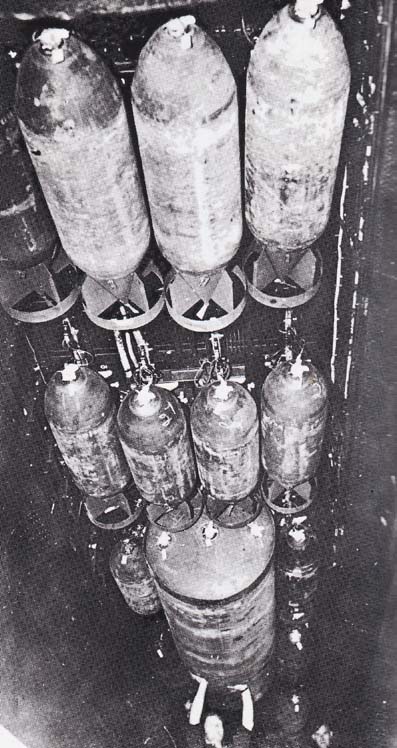 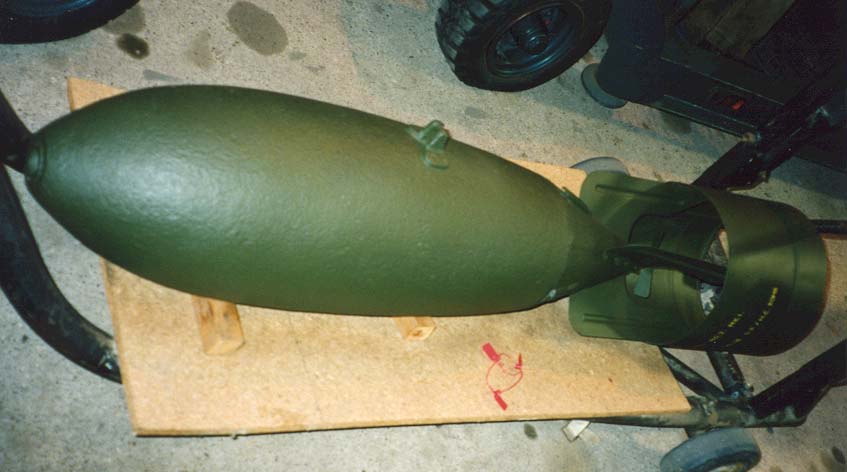 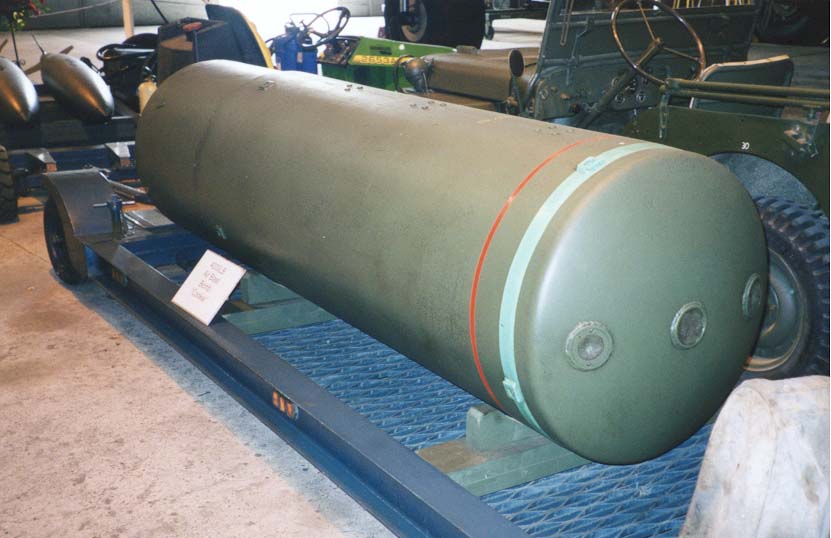 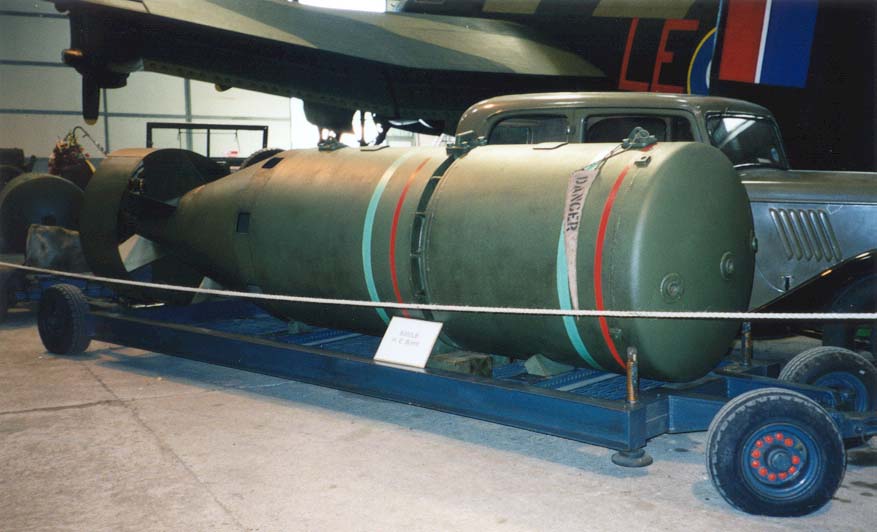 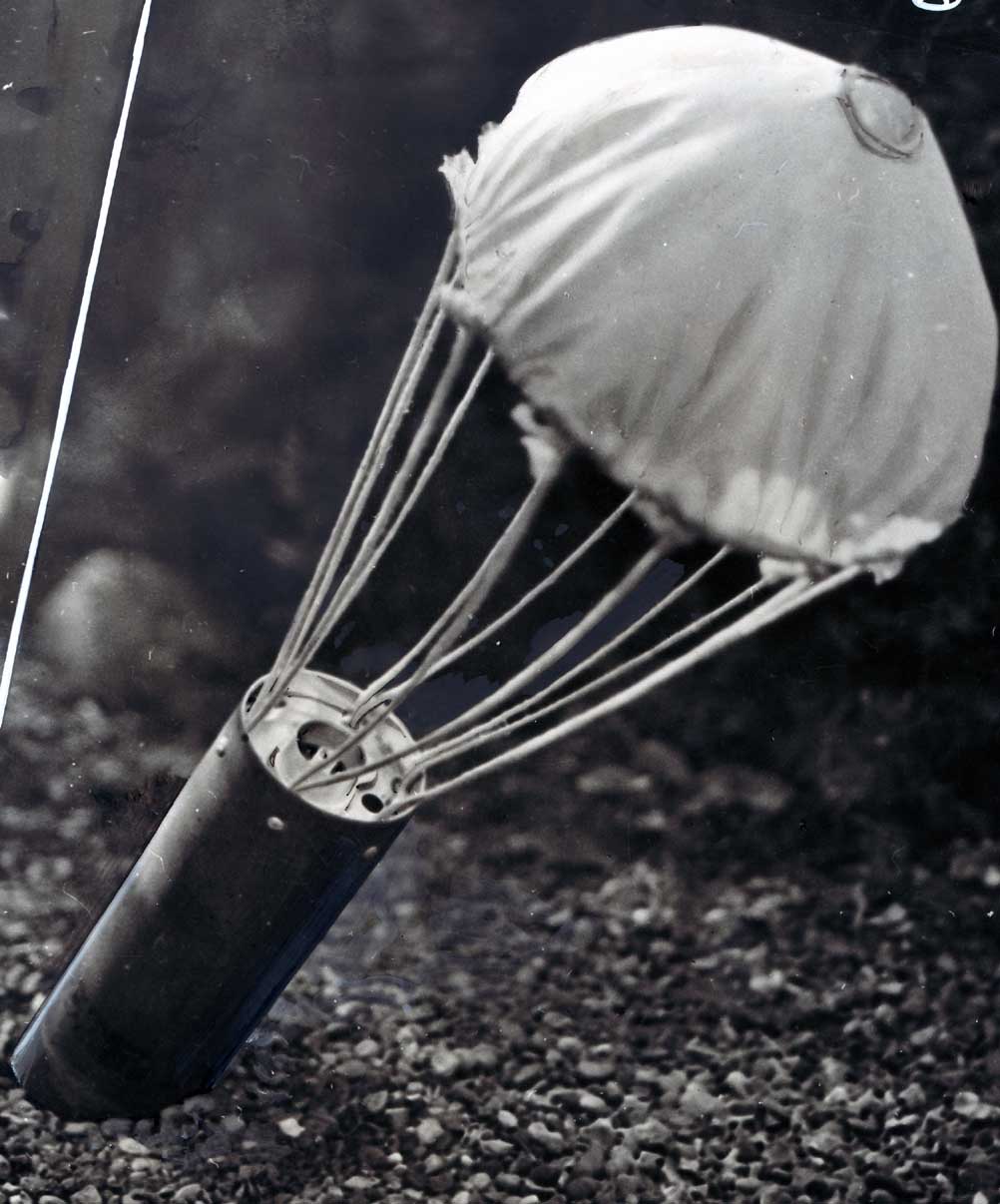 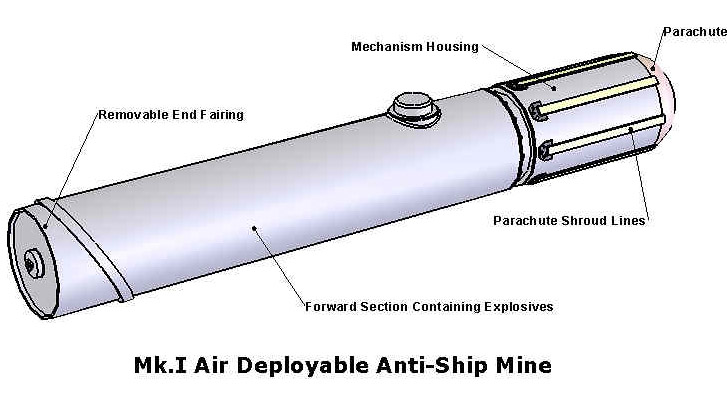