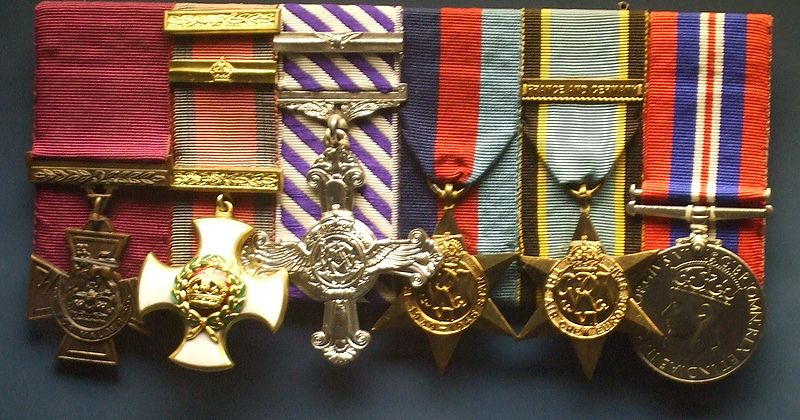 The highest decoration that can be awarded in the United Kingdom to all members of the three services is the Victoria Cross instituted by Queen Victoria in 1854. In World War Two 13 members of Bomber Command were awarded the Victoria Cross or VC for short, at least this number again were recommended but not awarded this highest of decorations and one that has the greatest respect and admiration the world over. It was also the only decoration that could and still can be awarded posthumously.

One of the most famous awards of the VC to Bomber Command was to Wing Commander Guy Gibson for leading 617 Squadron's attack on the Ruhr Dams in Germany. They soon became and are still known as the Dambuster Squadron. Sadly he did not survive the war and today the only member of Bomber Command awarded the VC alive is Bill Reid, who later served and was shot down and made a prisoner while a member of 617 Squadron then commanded by Wing Commander Leonard Cheshire himself awarded the VC.

The Distinguished Flying Cross or DFC was in the main awarded to officers of the Royal Air Force, and many members of Bomber Command were awarded this decoration with its distinctive diagonal blue stripe, one of three flying awards having this distinct style of ribbon. The DFC could be awarded for a tour of operations, or an immediate award for one operation. Made from silver the medal did not carry the recipients number, rank and name but was only dated with the year that it was awarded.

The next highest award that all members of the three services including Bomber Command was the Distinguished Service Order, or DSO for short. Many DSO's were awarded to squadron commanders for a long period of leadership but in some cases it was awarded to junior officers for one operation. Pilot Officer Richard Reed of 576 Squadron was awarded the DSO for an operation to Mailly Le Camp but went missing and was reported as having been killed only three weeks later without knowing he had been awarded the DSO. He is now buried along with the rest of his crew in the Reichswald War Cemetery, Germany.

The Distinguished Flying Medal or DFM, was the equivalent award to non-commissioned officers and other ranks of the DFC. And could be awarded for a tour of operations or an immediate award for one operation. Made from silver the medal had the recipients number, rank and name on the edge.

The next highest award that all members of the three services including Bomber Command was the Distinguished Service Order, or DSO for short. Many DSO's were awarded to squadron commanders for a long period of leadership but in some cases it was awarded to junior officers for one operation. Pilot Officer Richard Reed of 576 Squadron was awarded the DSO for an operation to Mailly Le Camp but went missing and was reported as having been killed only three weeks later without knowing he had been awarded the DSO. He is now buried along with the rest of his crew in the Reichswald War Cemetery, Germany.

The only campaign star awarded solely to the Royal Air Force was the Air Crew Europe Star. The requirement for this medal along with the Atlantic Star was quite arduous and complicated.

The first two months on a squadron qualified you to the 1939 Campaign Star, the next two months completed qualified you for the Air Crew Europe, provided one operational sortie had been completed. This star was introduced on the 3rd September 1939 and ceased on the 5th June 1944. Those who having qualified for the Air Crew Europe and flew after the 5th June received a clasp or bar France and Germany to wear on the Air Crew Europe Star. Those that went over the 5th of June but had not completed 2 months or 60 days received the France and Germany Star. It means in this instance that having started flying on operation say in February 1944 one must complete the required 60 days before the 5th but if you went over this date by only a matter days you did not receive the coveted Air Crew Europe Star. This means in essence that you had flown something like 58 days of the required 60 but did not get the medal because you had flown after the 5th of June.

If a man was killed he would be awarded the star irrespective of the time he had served. If a man was wounded or injured and could not continue his service towards the 60 days he would be awarded the star irrespective of time served. Time as a prisoner of war counted provided the first two months and the 1939 star had been awarded. But if you evaded capture and got back to the UK before completing the required two months or 60 days you were not awarded the star. The service could not be continued until the required 60 days had been reached as evaders were not allowed to fly over enemy or enemy occupied territory, particularly having been helped by the escape organisations in Europe.

The France & Germany Star was awarded to all three services after June 5th 1944. The men of Bomber Command were awarded this star for flying operations over Europe.

The Defence medal was also awarded to all three services plus the civilian services such as the civil defence, police, fire service, Home Guard, were also eligible provided the qualifications for the medal were complied with.

For members of Bomber Command they had to have three years non-operational service, if they had been in any of the above civil services prior joining the RAF this service could contribute towards the required three years. In some cases men would come into the services already having qualified for the Defence Medal. Overseas services of a over a year qualified for the medal.

Many would say that everybody who served in country in any capacity should qualify particularly with it being called the Defence Medal but this was jot so. One classic example of a man who did not qualify for the Defence Medal was the late Wing Commander Guy Gibson VC, DSO & Bar, DFC & Bar. He led 617 Squadron on the famous Dambuster for which he was awarded the VC. His service from September 1939 to September 1944 when sadly he was killed on an operation did not include three years non-operational service. Those that were killed thorough war service and those awarded a decoration were awarded the Defence Medal irrespective of the length of service.

The War Medal (3 September 1939- 2 September 1945) was awarded to all full-time personnel of the Armed Forces no matter where they served. The only qualification for award of this medal was that they must have served at least 28 days irrespective of whether they were operational or non operational.

Although there was no official campaign medal awarded for members of Bomber Command an unofficial medal was struck. Sixteen years ago a competition was held in a magazine to design a medal for Bomber Command. The idea was to mint a small number of medals and no more.

There were no thoughts of minting any further medals until the word got out and a request from ex-Bomber Command aircrew and ground crew was received to make the medal available for all those that had served in Bomber Command. The first quote from a firm was £25 far too much but the second was £15 of which £1 would go to the Bomber Command Association. This was accepted and the medal made available with a ribbon ready to wear and in a fitted case. To date with thousands sold this has meant the Bomber Command funds have also swollen by thousands.

The main issue to do with this medal is that to obtain a medal substantial evidence must be provided of service with Bomber Command, and that it is also available to the ground crew of Bomber Command whom the aircrew thought the world of.

The Bomber Command Campaign Medal can be purchased for twenty-four (24) UK Pounds Sterling from:

The last award also awarded to all members of the three services was a Mention in Dispatches or MID, which as with the VC could be awarded posthumously. A classic example is all 50 men, including Bomber Command who were shot after the great escape in 1944 were awarded posthumously an MID. This award was depicted by a bronze oak leaf on the War Medal.

The committee who were responsible for medals awarded for World War II was formed in 1946 but had only two officers from the Royal Air Force. The control entitlement and issue of medals lies at PMA Sec 1C at RAF Innsworth, Gloucester. They process all applications for medals to ex-members of the RAF in World War II.

Their task is a tough one, one hand trying to be fair and correct and on the other keeping to the rules bounding the issue of medals. If you are entitled or think you are entitled to a particular medal or medals they will make sure within the rules that all medals due to you are issued. Please be patient and work with them and not against them they are firmly on your side so give them all the help and information you can. In some cases a copy from your flying log book concerning a particular operation that may not be on your service records will suffice.

This decoration was established by the French Republic in 1915 to commemorate individual Mentions in Despatches. The cross is awarded to soldiers, airmen or sailors or all ranks, officers included, and also to officers and men of Allied forces, mentioned in French Despatches, for an individual feat of arms mentioned in a Despatch from the general officer commanding an Army, Army Corps, Division, Brigade or the C.O. of a regiment or the corresponding unit of Naval forces.

The different classes of despatches for which a recipient was awarded the cross may be recognized by the following emblems on the ribbon: Army Despatch - small bronze laurel branch (Palme en bronze); Army Corps Despatch - silver gilt star; Divisional Despatch - silver star; Brigade, Regimental or similar Unit Despatch - bronze star. Every mention is represented by its emblem, thus a man can wear the cross with a silver star and a bronze palm. For every five bronze palms he gets instead a silver palm. The award of the Légion d'Honneur carries with it a Croix de Guerre avec Palme.

The ribbon is green ribbed with black and has seven red stripes.